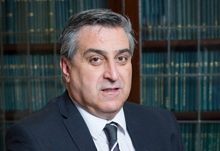 Carl has a mixed client base of owner managed corporate entities and a particular specialism in charities, associations and clubs. In common with Geens’ philosophy Carl is closely involved with his clients and likes to be “hands on” providing all round business and taxation advice to the entity and its stakeholders. He regularly advises on share valuations and exit planning as well as business start-ups, profit extraction and corporate structures.

Born and educated in the Stoke-on-Trent area, he joined Geens in 1982 before moving to the City of London for a short period, gaining valuable experience in a mid-tier accountancy firm. He returned and rejoined Geens in 1989 and became partner in 2006. Carl, once upon a time, was a semi-professional footballer with Port Vale Football Club, and latterly Leek Town until his knees let him down. He follows all sport and now regularly plays golf being a member at Leek Golf club.