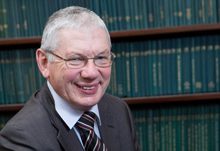 Stephen began his career at Geens in 1972 and worked his way through the ranks to Office Manager. Having taken a small step into retirement he now works 2 days a week and deals with Geens’ own internal matters.

Outside of work he has recently retired from ‘competitive’ running having completed 75 half-marathons and one marathon, totalling 1008 miles!